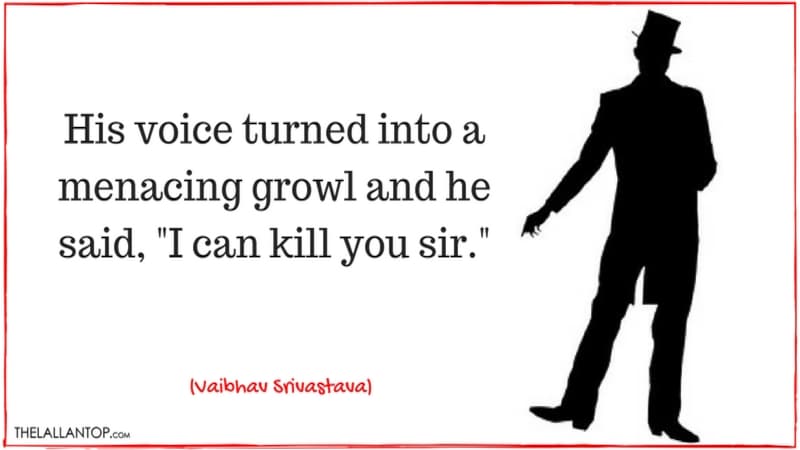 The Street Conjurer and Ego

He wore a dull grey suit which would have been impressive in the past. Below the suit was a stained shirt he carefully buttoned up. He was trying to look as nice as possible while maintaining the air of a street conjurer. He performed juggling tricks and clicked small flames of evanescent fire with his fingertips. He warmed up his audience by saying, “The world claims to do magic and the world lies! There are few who remain, and can do the wonders that I do. One was my master Bhuto, and one lived on the planet Pluto, and now my master Bhuto and the planet Pluto both are no more. There is me, and only me. I am Kasif The Azam. The Great Kasif! These tricks I show, they are not by sleight of hand, no sir. I, and I alone do magic.”

A thick crowd formed a circle around him, wrapping shawls, wearing sweaters and hiding themselves in the almost-solid fog. Surprisingly there was no fog in the circle in which the conjurer practiced.

He did the regular street-magician stuff, making cards and coins disappear, switching caps from the heads of the bystanders. His magic seemed mundane to me, and to a few others, but in general he was surrounded by admirers in awe. He played several acts before taking off his dull grey hat to reveal a head with thinning hair, and then seemingly skated on shoes without wheels attached, moving in the perimeter of the circle. He said, “And now kind sirs, and more sirs because I see no madams here. It is time for interval. I shall take a five minute rest, but please kind sirs and appreciators of True Art, I wish for a small donation, to the cause of a lost art. I, I alone am the last surviving descendant of the magicians. Please, for the sake of my forefathers and your fathers.”

He got a handsome response from most of the crowd; his hat was soon full of coins, and mostly notes of the denomination of five and ten. There was also a note of fifty, given by some enthusiastic fan. When he came to me I contemplated dropping my half-smoked cigarette in his hat and watching the whole thing burn.

He stopped, his heels made a cartoonish screeching sound of brakes being applied. “Kind sir for sake of your lungs, please do not smoke. Smoking Kills – the pack says.” He produced a pack from his pocket.
“Then why do you carry a packet in your pocket?” I asked. “This is not mine.” He laughed a fat man’s laugh and said, “It belongs to the gentleman on your left who I afraid shares your filthy habit.” The man standing next to me quickly checked the pocket of his jeans and found that the magician was right. “Give it back!” He said, while the crowd applauded.
“What do you want sir?’
“My pack! Give it back.”
“Why not sir, it is yours take it.”
The man quickly took it and opened it to see its contents. “It’s empty!” He cried.
“Cigarette smoking bad for health kind sir.”
“But where are the cigarettes?”
The conjurer waved his hands in a strange fashion and said “May those filthy things rain upon this man, who does not know how wrong it is smoke!” And sure enough, out of apparently nowhere, 5-6 cigarettes rained from the conjurer’s hands to the ground near that man’s feet. The crowd clapped again as he turned and bowed slightly to thank the crowd.

He came to me again; I kept on smoking contently until he waved his hand and doused my cigarette. I remained calm and threw away the stub. “Kind sir, for exchange of medical advice and magic tricks, a small donations, please?” He said.
I stepped up in front of him and said, “No.”
“No?” He moved back to the centre of the circle and said, “why not? You do not like magic?”
“Oh I love magic, but I don’t believe what you are doing counts as magic.”
“Oh please sir, the display not good enough for you? You want what? Shooting stars? Cannon balls? Tell me sir, I will beg to differ and give different trick.”
“What can you do?” I asked him.
“You challenge me sir?”
“All the things you did, that guy with a monkey in Chandni Chowk can do to. I want you to show me something very few magicians can do.”
His voice turned into a menacing growl and he said, “I can kill you sir.” The crowd let out a collective gasp. He changed his voice to normal and said, “I kid! I joke! I am Comedian. See, each magician has to be comedian. I make a killing joke. See?”
I moved closer to him, the crowd moved a step back, now almost afraid of the conjurer. “Can you read my mind?”
“I can do anything sir! I will prove it!” He snapped his fingers and a bowl of fire appeared in his palm, he threw it in the air and the fire turned into a crow and flew away. He was getting worked up.
“Can you read my mind?” I asked again.
“LIKE A BOOK! I am Kasif The Azam! I am no mere mortal! I know black voodoo magic of Afrika, I know white man’s magic of Amrika, I have met Ashwatthama and learned magic of Mahabharat from him! Mock me do not!”
“Can you answer a question about me?” I asked.
“I know you!” He said, holding up a burning finger in front of me. “I can see your past as I can see my hand. I can see where you were and what you do now. Ask what you want I can tell what you ask.”
I waited for a while to ask my question, the crowd slowly crept in closer to where the conjurer and I stood. The fire on his finger tip burnt with a constant intensity. I chose my moment and asked him, “Tell me. How much money do I have in my pocket?”
The flame on his finger jumped up to almost a foot as his eyes blazed and bore into mine. After a while the fire on his finger and his eyes died down. He said in a heavy voice, “I cannot answer that question.”
The crowd looked shocked, clearly they were rooting for him to answer my question and maybe burn me using his magic. I heard distinctly audible murmurings of ‘What?’ and similar questions around me. “You knew I couldn’t answer that question.” The conjurer said, sounding so dejected that I almost felt sorry for him.

I walked away quickly, without taunting him or saying another word. I tore through the crowd, and joined my friend Prakash who was waiting for me outside the circle. He wiped perspiration from his brow and said, “Man I thought he had you there. So he wasn’t really a magician, was he? Must be a big phony. I tell you my friend, it’s all show, and it’s all a big drama.”
I smiled and said, “That man was not a phony. He was a real magician.”
“What?” Prakash asked, “So how come he didn’t know how much money you had in your pocket?”
“He was reading my mind, he knew what I knew.”
“And?”
“And even I don’t know how much money I have in my pocket.”

(The Street Conjurer and Ego is part of ‘Borrowed from Tomorrow’, a collection of Short stories)